Last year (2018) I got 2 quince trees (variety "Aromatnaya"), one a freshly grafted bare root tree from the HOS Propagation session and the other a (presumably) year old specimen from One Green World.

Since I live in Bend on a reasonably shady, small lot it's a challenge to find good planting locations.  My compromise was to place the larger quince in a warm deer-free pocket in my garden, and plant the smaller one (temporarily) in the same bed about 2 feet away. I figured that was better than potting it up in our High Desert climate but I knew the compromise would be crowding.

Both trees have grown vigorously despite being buried in 2 to 3 feet of snow this past winter and it seems like it's time to move the smaller one on.

Fortunately I've located a good spot for it and my question is when to transplant it.

Now? or wait for dormancy?

Thanks for any hints!

I’d wait until they’re dormant, and the grounds not frozen a foot down

Thanks, will wait until well into fall.  Last year we only had surface freezing after Christmas, and snow cover kept the frost from getting too deep.

Some of the books I've seen recommend root pruning, but I can probably move this one with nearly the entire root ball intact.

Fall, but with enough time to grow some roots before winter freeze.  Maybe September or October.

I've moved some fairly large apple trees with significant loss of roots, in the fall.  They all survived.

I would only prune roots that are broken or not avoidable to cut.  But if you can't help cutting some, it probably won't hurt.

This is a five year old Golden Sentinel apple tree that I transplanted last October 5.  I was not able to get much root.  I kept it watered until leaf-drop, and have been giving it extra water this year.  It survived and put out new growth on all of the branches.  I've seen recommendations against pruning the top to match the roots, but I did prune about one third of the top and shortened the branches by half, thinking there was too little remaining root to support the top.  Most of the leaves still crispified, but in the Spring it made all new leaves.  Next year I will let it set some apples. 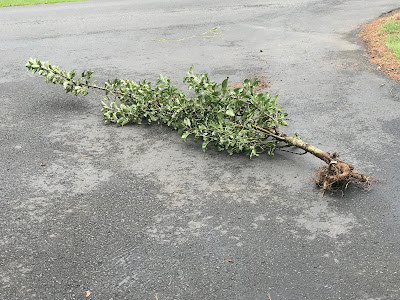