The Wilson is loaded with flowers as per usual. The Mango Pawpaw is also exhibiting ‘early’ opening of leaf material. Usually the flowers come first and are nearly finished producing new openings before the leaves present themselves. Wonder about if it’s going into a resting cycle. It’s been producing famously for 12-14-16 years, I dunno, a whole bunch of years, with a lot of well maturing berries. Usually around 125count anyway, at least the last 10 years I’d guess. Or maybe someone knows if they go into decline. Pawpaws in general or Mango specifically. A neighbor, maybe 3/4 of a mile from here, had a younger mango (4” caliper) Pawpaw that up and died maybe 4 years ago. Her friend suggested the heavily chip mulched yard topping may have suffocated the roots. After a few years. Huhhm? I did mulch, fall before last, with potting soil ‘pads’ from the growing of micro greens after harvest. Seemed to be the right thing to do at the time.

l don’t recall if one of those recent Pawpaw posting links (within the last 3-6 months) had made mention of specific decline, although I do seem to remember mention of a decline in the trials at the Corvallis station of the germ plasm repository, leaving, I believe just some of the seedlings and none of the early named varieties.
I'm hoping she just wants to rest.

This is an interesting question James, but I don't really know the answer.  I've had pawpaws for many years, but I moved and planted new ones, so I haven't really had one particular tree for a long time.  Following.

Mine tend to die after a few years.  I had fruit on Sunflower, then the scion died but rootstock grew.  NC-1 fruited but looks like the trunk has a disease.  It has a couple of fruits this year.  I'm letting some rootstock suckers grow and they bloomed this year but no fruit.  Allegheny and Rebecca's Gold died after a few years.  Mango is still alive - small.

Mango had one flower set.  All of my set fruits were ones I hand pollinated. 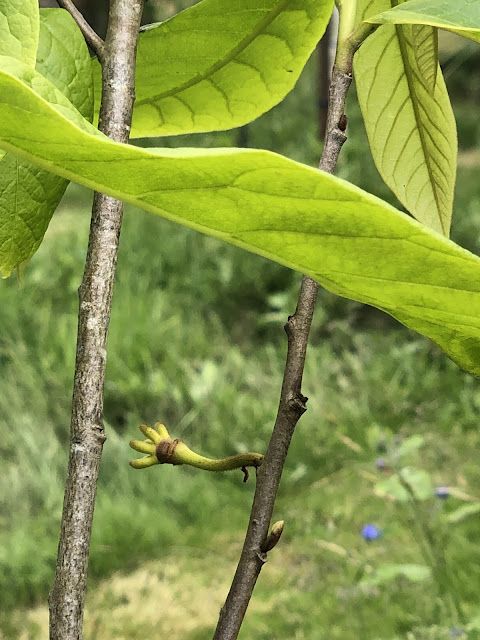 The rootstock from Sunflower has a cluster, and NC-1 has a single or two.

I'm letting mine grow as bushes now so if a top dies there could still be fruit from the rootstock.    With grafted types, of course it's no longer that cultivar.  I did have some seedlings but they might be overtaken with weeds.  I should check and take better care of them.  The rootstocks are just pawpaw seedlings anyway. I have never grafted pawpaws, but I've grown many seedlings. Do you who have grafted pawpaws have any hints? I think that I have read that they are more successfully grafted later than apples.  Maybe late May or June, like persimmons.  Any ideas?
John S
PDX OR

So, my pawpaws produced a little bit this year after all. I’m happy to report, of course if you have pawpaws to eat it’s hard not to be 😃. They’ve been dropping for a little over a week. Here’s a photo from this morning of the overnight drops (in arms). I had been worried about pollination because of abnormally low incidence of flowers on Mango this spring. Been counting for months potential fruits. Figured about 40 viable per each of two trees. That’s about a little less than a third of the last four or so years off the Mango and about half the last 2 or 3 years off the Wilson…

Not sure how to shrink the photo size on the iPad, sorry - figured out how to rotate the image 360 degrees to make them display upend up. Hopefully the preview indicating an earlier  pre-edited photo doesn’t show will be what publishes.

By the way, some time ago on another Pawpaw posting someone asked my opinion/favorite of the two, I’d have to amend my observatIon. I think that like other fruits there will be seasonal differences,  just natural variations where it’s better one year….  You know. The other happenstance I’m thinking, call it maybe maturity, takes some time to come into its own. First fruits were in 2011, SuCcesFul hand pollination as of 2013. The last two years Wilson has given a consistently  better tasting fruit, particularly last year, banner, best ever and better than previously thought, better than Mango. Seems holding true this year as well, although mango so far has been really nice in terms of fullness shape and size.

I'm glad you got some fruit, and I'm glad that Wilson is doing well for you.

Many years back, I corresponded with Neal Peterson and got him to sell me some scions.  In the course of our discussion, I let on that I had Wilson at my old place (never fruited).  He had some words about the variety, and none of them good.

Sounds like it really depends on location and conditions.  That's a good reminder to keep an open mind.

Yes, the last of mine fell yesterday.

I have nowhere near the harvest that James has.

I was happy yesterday when my son said, "Wow! I had forgotten how good these are!"

I have never had a Paw Paw. I have heard then don't last very long and don't store. What do you guys do with all that fruit? Freeze, ferment, can? Just curious

It is one of my favorite fruits.  My whole family likes them and when I have a lot (not this year) I share them with friends, colleagues and students. My wife is vegan, so a high protein fruit is very attractive to her, in addition to the dessert quality flavor.   Most people don't know that they exist, even though they are North America's largest native fruit.

Where to you get your trees, scions, rootstock? The only place I have found around Corvallis so far is Home Depot. The reviews are worse than a warped 2x4 that's full of knots. I can go to Portland but would rather not if possible.

jafar said
I'm glad you got some fruit, and I'm glad that Wilson is doing well for you.

Many years back, I corresponded with Neal Peterson and got him to sell me some scions.  In the course of our discussion, I let on that I had Wilson at my old place (never fruited).  He had some words about the variety, and none of them good.

Sounds like it really depends on location and conditions.  That's a good reminder to keep an open mind.

9 maybe, Years ago, Ron Powell was out to the HOS summer open house, (that year NAFEX had their week of meetings and visitations here in the Portland area), I listened to some informal Pawpaw discussion, found a lull to engage briefly. Similarly, when telling of my Wilson, Ron let on that it was not considered that good of a Pawpaw and pretty much had fallen out of (almost?) all catalog offerings he was aware of. Recommended any of the Petersons as being some of the superior Pawpaw to pursue. I had considered replacement, now glad I haven't yet.

Maybe because of cross pollination by Mango, or age of tree maturity, or my observation that pawpaws from my yard are/were best consumed post haste, within a day or two once they've released from the tree; although this year many of the 2-3 day old drops maybe even 4 have continued to have been very good. The Wilson is proving to be tasty, but on beyond that, the flowering period makes it in my opinion, exceptional. Starting a week and a half or two weeks before the Mango (I have just the 2 trees), and continuing to put out new flowers in numbers for minimally 2 weeks after Mango and probably 3, a trickle after that.    Mango ordinarily puts out flowers for a week and a half or two and a half, I'm thinking.

It's good to know that Wilson is probably a good pollinizer for other pawpaw.  The two varieties I have at my new place, I don't remember which, look to both have flower buds on them.  Hopefully I'll get my first fruit next year.   They've been growing painfully slow.   I've been bad about keeping them watered and fertilized with nitrogen.

I'm terrible with the science of soil amendments and all that. I think I probably did amend the planting hole with home made compost originally and I'll mulch with what has been at hand, sometimes with some barrier to help suppress weeds and grass. Early on barrier would have been corrugated cardboard, later a couple applications of coffee bean sacks under sometimes Hawthorn litter from hard space of the driveway (took out the last Hawthorn a year ago) more often produce of my small 8hp chipper/shredder. Resultant product being much smaller than commercial chips, with a lot of longish twig remnants that jump through the screen, anyway it turns to dirt pretty quickly, the worms pull it down, and I think is really good soil conditioning with the longer twigs breaking down slower adding texture.  Anyway I was afraid that maybe I got a nitrogen overload  from a hefty helping of  commercial organic potting soil 'pads' and micro green stubble from my next door sons experimentation into home scale small commercial production, which I piled on as mulch year before last. Wondering if that was the cause of this springs phenom of very, very, exceedingly few flowers on the Mango. And... leaf came extra early, compared to Wilson, which didn't receive the same mulch treatment and presented as normally expected with lots of flowers. What I've always heard was nitrogen for leaf not fruit or root, maybe next spring a more 'normal' blossom set will bear out my present theorizing.