I am starting to downsize my home library among other things.  There are some books that I enjoyed and learned from greatly.  I think they are best shared with someone who will benefit more from them more now.  I live in Battleground, so you would have to come here to pick up if you want one (or all of them).

I enjoy and respect old books as sources of knowledge and lore.   So, some of these are old,  As time passes and our dependence on social media and the internet grows, much of this will become unavailable if not already.

How to Prune Almost Everything, by John Baumgardt. 1968.

The Fig.  Its History, Culture, and Curing, by Gustav Eisen.  1901 (modern reprint of a comprehensive old classic).

The Illustrated History of Apples in the United States and Canada,  by David Bussey.  2016.  This is the massive 7 volume with extensive notes and historic USDA watercolors of apple varieties from early 20th century.  It's worthy of a college library or other library.

I learned most of what I know about gardening (and most other things) from actual physical books like these.    There might be a few more, later, if I decide to give them away too.

If you want one of these or all of them, let me know and we can arrange for that.

Having just "returned" to the Forum from my usual summer absence, I've been wondering whether you were still active on the site.  As I've been getting older, I too have been looking around at all the books that my wife and I have accumulated over time.  I'm not going to live forever, and I have learned so much from so many.  Thank God real books still exist!  ...A physical object that one can own, and refer to at will, and without going blind staring at another infernal computer screen for hours on end!

I sincerely appreciate you offering these books on the Forum.  I already have most of them and, like I say, I myself am deliberating on when and how to start dispersing my library to individuals who might find the books useful.  Not everybody appreciates the value of a physical book that is informative and has been labored-over by a knowledgeable person....  So many younger people these days poo-pooh books and tell you that everything they need to know is online.  Unfortunately, I've also noticed that too many of these young 'uns can't discern truth from fiction, fact from lie.  It doesn't bode well for a healthy future.

I hope that you can find some takers for the books, and I know from experience that giving a book to someone with "a slight interest" in something can sometimes really spark a flame and encourage intellectual pursuit.

Glad to know that you're still with us on the Forum.  I hope that you have been well.

I haven't been on line as much.  Still here though.  This summer and fall I was very busy with vegetable garden and fruit trees, especially when the harvest became overwhelming which meant a lot of canning.  No complaints though.  Now there will be treats all winter long.

I hope someone wants the books.  I think they are more likely to be appreciated by someone here than the library book fair.

It occurred to me that one potential option for you might be offering them to Powell's books in Portland, Oregon.  My wife and I have purchased some books there and sometimes they have older books that one might have trouble obtaining anywhere else.  They'd assess a book's value as it relates to the market, and would pay you an amount based on the current value of the book(s).  The last time that we were there (--maybe 3.3 years ago--) I recall seeing 1 copy of "Apples for the 21st Century" on the shelf.  Some other books that I was looking for weren't to be found.  If a customer at Powell's is looking for a specific book, they might just find yours.  Just an idea.

Some books there at Powell's are more general, but there are also some obscure books that I would've loved to buy if I had the money and a longer lifespan.  If I recall, one was a monograph of a subgenus of Bombyliid Flies.  ....I've often wished that I could have multiple lifetimes, within each of which I could specialize in a different natural science.  Fact is:  Within any specialty, there is more than a lifetime's worth of things to learn.  My central interest has been botany, but since childhood I've been a naturalist at heart, and nowadays I often find myself content to simply spend time in the natural world, which modern humans have divorced themselves from in the belief that they are demigods.

Glad to hear that you're still with us.  Hang in there.  Life can be beautiful!

Powell's would be a great idea and I have bought and sold big grocery bags of books there when my interests changed or when I downsized my personal library.   I have had a love affair with books since childhood.  They even saved my sanity, I think, when I was a young solder stationed abroad in the 1970s.  I still read a lot.

Fortunately, a home has been found for these.  There may be a few more later, I don't know.

Thirty years ago when I lived in Corvallis, my perfect Saturday road trip was go to Portland, spend an afternoon at Powell's and Music Millennium, grab lunch at Macheesmo Mouse and dinner at Jarra's.

But for me, now, a trip into Portland is very much an unwelcome ordeal.  Such is the effect time and history.

On being a naturalist at heart, my dad used to call me "Nature Boy".  I still have a book written for the young naturalist, given to me when I was in grade school.  Each year I mark another orbit around the sun by planting another tree - this year an Aspen, I grew a few years ago from an offshoot of a tree planted 10 years ago for the same reason.  I have ginkgos, alpine eucalyptus, lindens, dawn redwood, various maples, chestnuts, birches, and others on my two acres resulting from that tradition.

Here is this year's aspen.  It's kind of tall and not a lot of root for a tree that size.  However, I've had pretty good luck before, so we will see.  Fall is a good time to plant trees, including many orchard trees.

Starting some fall pruning now.  Lots to do in the fruit orchard.  In the photo, you can see two of the paw paws and some overhanging Charlotte peach and Hollywood plum branches. 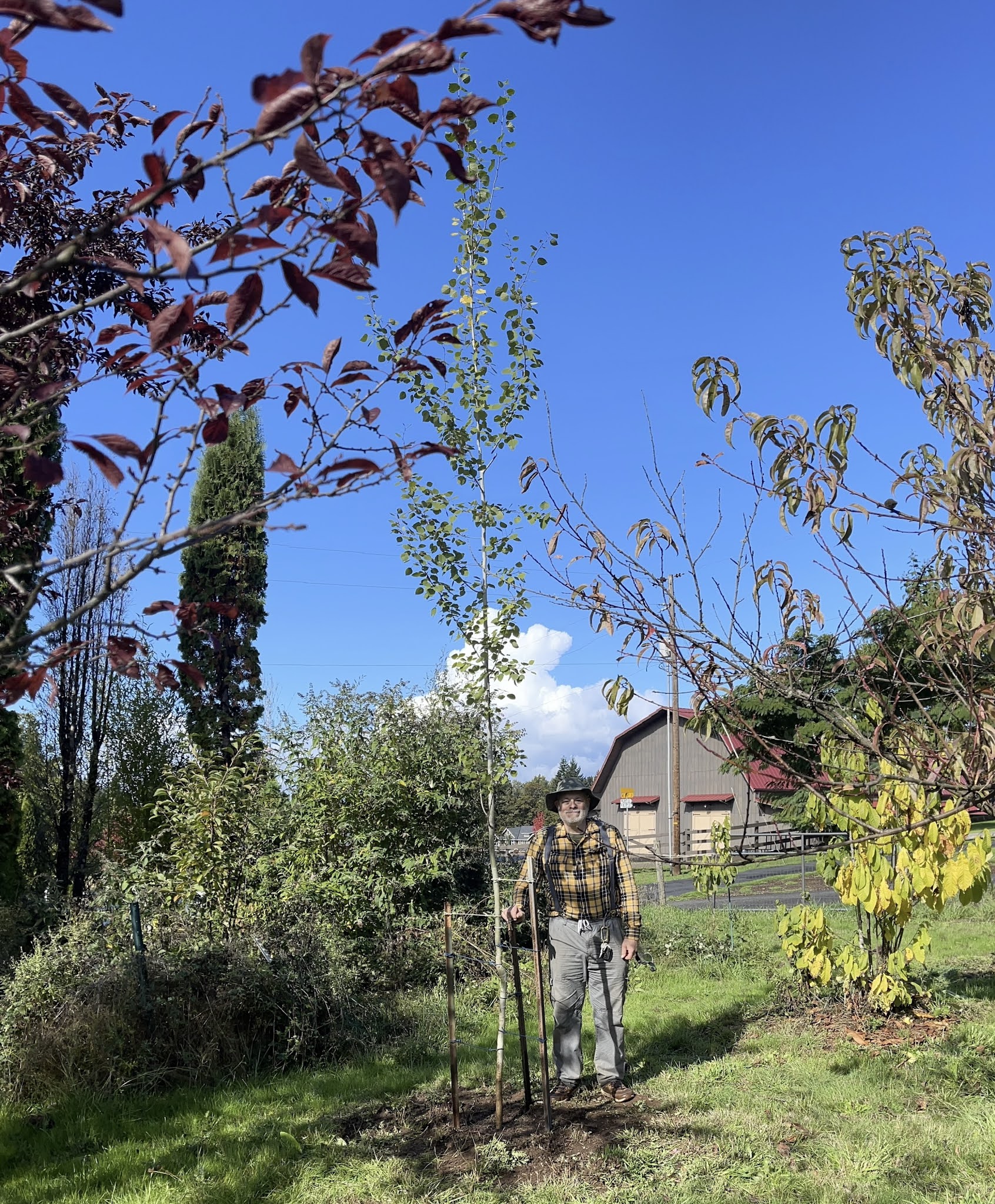 The books are all given away now.