The past two weeks I have been capturing Lygus bugs (stinkbugs)(a true bug genus) from fruits; their damage is similar to SWD fruit flies, but without the deposited egg and resulting maggot. The Lygus bugs are 1/8" long. 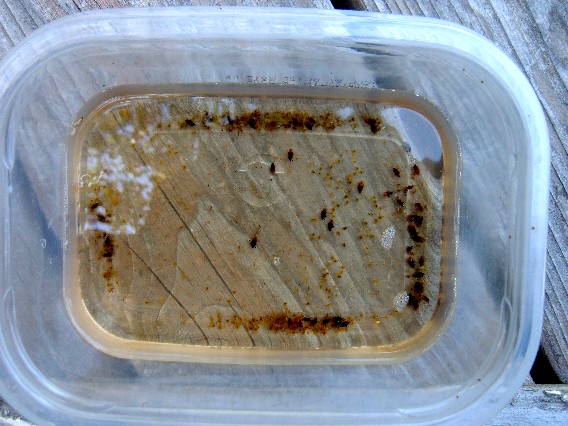 Today a buprestid beetle, the Rose Stem Girdler, got caught up in the Lygus sweep. There was also leaf damage from this beetle. 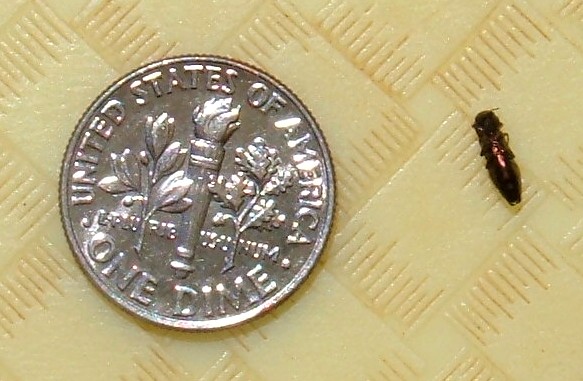 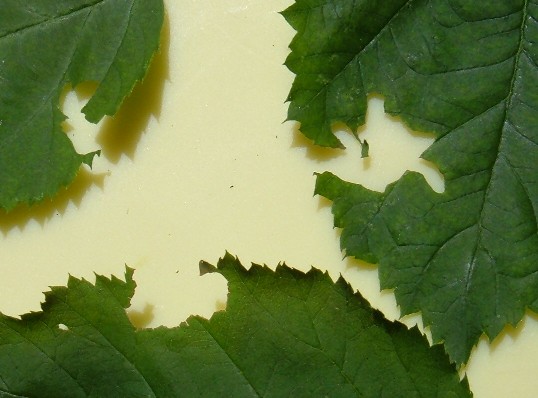 ^note the leaf edge and ragged border typical of this buprestid feeding habit. Feeding occurs before egg-laying on caneberry stems. Eventually the entire cane from the larva tunnel-girdle upwards will die.

Did you have a chance to send the above link in to a master gardener? What if any was the recommendation? Where does this apply?

If you are around wild stands of pawpaws or have any access to twigs and leaves from pawpaws to gather any this stuff I would seriously weigh out any possible remedies on your own. Then possibly come back some day and let us know it worked;
PawPaws hint-1
PawPaws hint-2

It still works for me when it comes to water borne bugs. The other day I had mostly new growth and ground that into several cups of water to kill bugs that were hatching out from the back of my solid bottom trailer that was slanted the wrong way. It had about 5 gallons standing water and hundreds of swimming critters but it got rid of them and I didn't even have to turn my trailer around to achieve this it all. 🙂

BTW, also be careful eating the fruit. Mine effect me. I can't eat mine but others have with no problems. Traces of insecticide are also made available in the fruit.

Great ideas, people! This is how we're going to feed people sustainably.

In this case, per above in the 2nd link, there could conceivably be a parallel in what I proved in 2006 with the ability of drenched pawpaw roots to toxify underground moisture loving creatures. I remember what I did 13 years ago very clear. I watered remnant leftover water from a plugged up pot of 2 junior pawpaws into another fruit tree pot containing another young tree with some form of ground dweller (somethings) living in there looking like 1/8th inch "slugs". Reason I know is that there were at least 2 dozen that looked dead to me. I thought "great, all these root pests are tying to fly away and out of the pots now". So I probably scooped them up and squished them. And the memory of it is the reason why I made my old forum post in 2006 which included my 1st of two accounts which water larvae (black wigglers) were also involved.

This "conceived parallel" that I am talki g about is to what is now the news as high Mississippi drainwater problems that are associated with higher than normal dolphin deaths in the Gulf States.

I hate to guess but it looks feesible to me that pawpaws could emit toxicity problems through the pawpaw natural drainage flood paths (the map) that have been occuring and not just effecting cold blooded nematodes or insect lives but to just about everything included warm blooded dolphins.

After comparing the last 2 links, any opinions now?? I am concerned enough because of what I have seen before to get this brought to the attention of those trying to unravel these mysterious dolphin deaths.

And Thanks John! ..your reply.

I don't understand the shift in discussion from caneberries to Paw Paws.

Perhaps the replies were intended for another existing topic and there was a Forum technical problem.

Not sure how this would affect searches for 2 different topics.

Update: A second buprestid beetle was caught; Lygus population has decreased in the last 2 days.

I think the connection is that Rooney found some similar bugs dead after flooding near paw  paw trees.  Could the paw paw's natural pesticides be coming into effect and killing animals during a flood situation?

I do think that it is quite interesting and helpful to think about how healthy natural plants can deal with a bug situation, and this may be one of them.

On the flood question, Dr. Zach Bush has developed a study that shows that the highest cancer rates in the United States are increasing the farther you go down the main Mississippi river system to the highest rates at the mouth by New oRLEANS .  He has also shown about the dead zones in the Gulf just outside of New Orleans are related to glyphosate and other pesticides, concentrating at the intersection of the largest river system in the United States.  THis could be the effect that is killing the dolphins.

I don't know if the natural chemicals found in pawpaw trees would kill these bugs in our caneberries, but it is plausible.

A 4th buprestid beetle was caught today while jostling the fruit over soapy water.

Lygus bugs still around but at low numbers.

Anybody have a "detonate" button?

Thank you to the "Deus ex machina" that nixed the post.  Is it possible to block any further postings from this spammer? -- Reinettes.