1. I've got a 12' tall apple tree that has two 3" bifurcated trunks about 2' above ground level, should I leave the central / upright one & prune the other more horizontal leader?

2. I ordered a dozen more Apple & Pear trees that should be here in a few weeks. Should I fence them off w/ something & if so, what?

3. Should I put something around the lower portion of the trunks to protect them & if so, what?

4. What medium should I plant them in - native soil mixed w/ potting mix, planting mix, or peat moss???

5. When should I fertilize & with what?

Thanks for any info!!!

Welcome to this forum.

I also welcome you to the forum.

That was a lot of questions.

Did you know that Viron, one of HOS's most respected orchardists, lives in VA?

1. probably, but a picture would make the decision clearer.

2. Are deer an issue? The reason is important.

3. Often a good idea. It depends on your situation and preference.

4.  I Like to go halfway between the native soil and the very best possible soil for that plant.  I prefer to improve drainage at the beginning, but not fertiilize new trees.

5. My preference: after the first year, as they green up in the spring.  I like organic sources, like urea.  I don't like to kill off the natural microbiology, which helps the tree.

Thanks guys! Yes, property is in the VA mountains & has very poor soil (that's why I was wondering about fertilizing when I plant in a few weeks). I did the soil test myself & randomly sampled all over the orchard site 4-6" deep. Will be doing another test as soon as the soil dries up some to see what I need after my applications last year. I'm guessing w/ such a low pH, that I shouldn't use Peat Moss. I'm planning on using good planting mix along w/ the native soil (50/50) unless there's something else y'all would recommend?

I wish I had a mentor for pruning fruit trees! I've been researching it for quite some time now but it is so unnatural to most all other pruning I've studied & performed for over 15 years as an arborist. I bought some 5' x 100' rolls of 2x4 14 ga. galvanized wire & will be using 2 t-posts per tree cage. I decided to use aluminum window screen for the bottom 2' of my trees. Still not sure what to do about bears in a few years when they start producing...

It was here when we bought the place. Not a great pic of the bifurcated tree, but the best I've got... 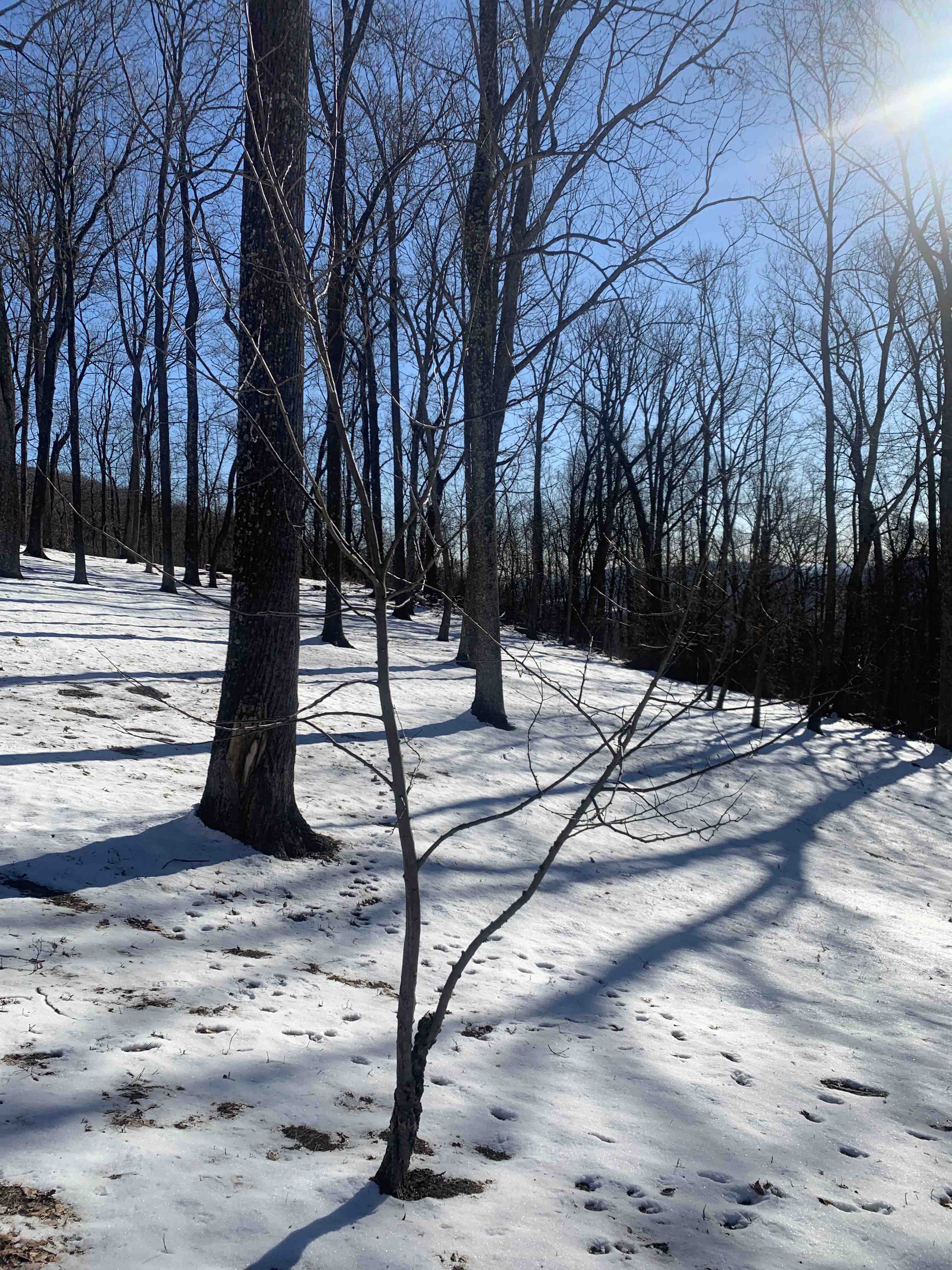 Thanks John, I hope what I learned back in ‘the valley’ is applicable here on ‘the ridge.’

One: If the lower outward facing limb/ trunk is of the same variety and not a grafted addition, I’d remove it.  The sooner the better, allowing it to send last season’s stored nutrients into the tree above.

My suggestion regarding new trees would be to order them on the most vigorous rootstock available.  Rootstock is the limiting factor, and if vigorous enough, will find what it needs to grow.

Two: Definitely fence them from deer.  We’ve no Elk ‘over here,’ but the deer are epidemic!  I just removed the 3 steel T-posts from around three of my 3-year in trees; a Euro pear, Apple, & Asian plum.  I’ll next loosely wrap their now exposed trunks with some of the 2 inch mesh ‘chicken wire’ fencing I’d totally enclosed the trees in, before the bucks begin ‘rubbing’ them.

The steel posts also allowed for some initial training of limbs, tying to spread them to the posts.  Out West, I used 4 posts per tree and consequently ended up with beautiful symmetrically spread canopies.  Here, I downsized

Though, I’ve a busy network of wooden stakes spreading them further; especially the pear trees (I’ve an Asian and European pear).

Three:  Starting near ground level, I’d wrap around the posts with the chicken wire fencing up to one foot above the post level.  Ugly, awkward, and an expense, but after removing it, posts too - they’re magnificent!

Four:  If you’re dealing with what appears to be forest floor, I’d recommend digging the proverbial ‘ten dollar hole for a five dollar tree.’  If you’ve sod to remove, I dig two piles: one is the sod, the other the subsoil. Then simply reverse & mix them when refilling. The latest advice I’ve found is not to bother amending the soil, as you want them to ‘acclimate’ to what they’ll eventually be plowing into.  Well drained, having come from a clay dense environment out West, is a wonderful aspect of this old Appalachian soil.

Five:  I’ve used petroleum based fertilizer, but very little.  In fact, I now attribute having lost several Asian pear limbs to fireblight (a pear killer around here) caused by too much fertilizer - too late in the season.  At least that’s what the research I came up with led to. So last season, very (very) little fertilizer in the Spring, and nothing for the remainder of the season - and no fireblight.

Apples & plums got several light applications of a balanced blend.  I’ve not tested or amended for pH. My neighbor’s two apple trees are likely the prettiest in the county, not only cuz I prune them to perfection, but whatever they need to thrive is apparently in the ground already.  We’ve lots of apple orchards around here.

My recommendations (to all):  Fence for deer, either individual trees or a perimeter fence - they kill fruit trees.  Remove sod, the further back - the better; it intercepts moisture & nutrients. Watch for vole tunnels or activity in the area; moles are fine, voles eat young trees & roots.

Prune soon; do not let a newly planted tree ‘grow a few years’ before pruning - do it immediately after planting.  Gently spread limbs, according to need; establishing a framework that will carry a load is far more important than ‘tasting their first fruit.’

Monitor for insect activity; ‘Japanese Beetles’ are new to me, and have been devastating to grapes & Asian plums.  Methods of dealing with any may be your choice.

- Let me know your region/ location.  Your photo shown some forest trees very close to the apple tree in question..  Your trees will need full sun, or will become leggy & lopsided seeking it.  I think you mentioned bears. A native ‘O,’ having spent a lot of time in the deep woods … I’ve seen more black bear action and damage over east in 4 years than a lifetime back ..home.

Our local Extension Agent had recommend me to a couple moving up from SC to their ‘dream home’ on the ridge.  She shown me a phone photo of a black bear gorging in an apple tree I guessed was easily a hundred years old. ‘What can I do,’ she asked?  My advice was to let her 6 old apple trees feed the bear/s, and start a new orchard nearer the house, preferably fenced. Some battles we just can’t win